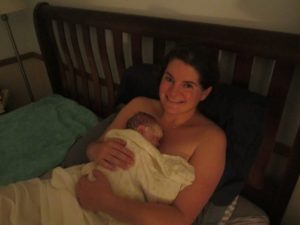 The short version of Ellie’s birth story is “Just like Timmy’s except head-first and in the calm of the birth tub in our bedroom instead of surrounded by nurses freaking out in the OR at the hospital.” 🙂

I woke up at 11:50 p.m. on Saturday night to a sense of pressure in my low back/pelvis that was followed by a small pop when I rolled over. I thought, hmmmm … was that my water breaking? My shorts don’t seem that wet, but I’ll go check. It didn’t seem like I had wet my pants, but there was more fluid there than I expected. I wasn’t convinced, but thought I probably shouldn’t wait to let our midwives know.

I woke Rob up and told him to start filling the birth tub while I called our midwife team and our doula. About ten minutes or so after my water broke, I started getting stronger surges but nothing a little swaying over the birth ball on the bed didn’t help with. Emme, one of our midwives, arrived and could tell this was the real deal. Over the next 15 minutes our other midwife, their midwifery student, and our doula joined us. The surges got a lot stronger and closer together pretty quickly after the pool was deep enough for me to be in, and getting in the water felt SOOO good. At first kneeling felt right, but then when I could feel baby starting to come down more, I told Rob I needed him in the pool. Little did I know that he hopped right in with his regular shorts on!  (I had a swimsuit set out on the dresser for him and assumed he’d change!)

Once Rob was in the pool, things really started to pick up speed. Surges were really close together without much break in between. Our doula, who also taught our HypnoBirthing class, had her HypnoBirthing CDs going in the background and was helping me stay focused on relaxation. The midwives were so calm and quiet that I sort of forgot they were there. 🙂 Using Rob as my birth stool basically, I breathed and nudged that baby down without anyone chanting “more more more” at me. So nice to feel in control and relaxed at the same time!

I felt my main bag of waters break while pushing, confirming my suspicion that the first pop just before midnight was just the forebag. Baby was crowning shortly after that and scooped up onto my chest after two or three more pushes. It took a minute before I even thought to look to see if it was a boy or a girl! I was so glad for the relief of being done and so happy not to have had a white-knuckle drive to the hospital. Even better, the boys slept through the whole thing in the room right next door, and I had access to an entire kitchen full of food despite it being the middle of the night.  🙂