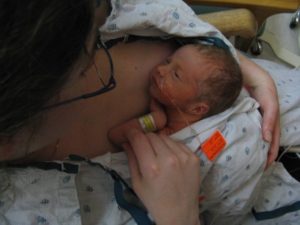 Our birth story began on June 28, 2009, about six weeks earlier than we had expected it to.

At about 10:15 on Sunday night I got up from the couch after having fallen asleep while Rob was on the other couch listening to a baseball game. As I rolled off the couch, I thought I peed my pants a little bit. I went to the bathroom and finished emptying my bladder, not thinking much of it except that I finally had the fun of third trimester incontinence to deal with. I went to bed and read a book for a little while but then realized that when I coughed or rolled over I was still leaking fluid. I went to the bathroom again and emptied my bladder (which seemed pretty full for having just gone 10 minutes earlier). I hopped in the shower to clean off quickly and went back to bed. Fluid kept leaking slowly but I wasn’t ready to say yep, my water broke six weeks early …

Rob came to bed at about 11:15 and I told him I had either been peeing on myself repeatedly or my water had broken. There was a moment of panic on his face, but he started asking all the right questions (when? clear? amount?) that we learned in our birth prep class. I got up to the bathroom again and noticed that the fluid was slightly pinkish now, which made me sure that this was for real.

We called our doctor, who confirmed with the hospital (Fairview Southdale) that we were far enough along to deliver there. Luckily we were past 32 weeks, otherwise I would have delivered up at Fairview Riverside where I did my residency training … that would have been really too weird. We headed to the hospital right around midnight and were in the triage area for about an hour. By that point, I was sitting in a puddle and didn’t feel I needed a lab test to prove my water had broken, but the tests confirmed it and I was admitted. I was dilated to 1 centimeter and was 75% effaced at the time of admission.

They decided that I was far enough along that they didn’t want to give me anything to stop any contractions. I hadn’t had any by this point, but they wanted a plan in place in case things got going. I was started on antibiotics to reduce the risk of infection for both baby and me. I got a shot of steroids in the butt to help his lungs mature quicker. I got an IV and continuous fetal monitoring (neither of which were part of my ideal birth, but hey, when you deliver early things automatically don’t go as planned 🙂 ).

I had some contractions starting around 3:30 that morning, but by noon they were gone. I was on bed rest with bathroom privileges, and I spent the day emailing people and drinking tons of fluids. Megan, my doula, came by to visit in the morning, right around the time the contractions were slowing down. When the contractions disappeared, I figured we were in for a long wait, which wasn’t necessarily a bad thing for the baby. In retrospect, I wish I would have spent at least most of the day sleeping, but I don’t think that the adrenaline rushing through me would have allowed for much sleep!

Contractions started up again around 1:30 on Tuesday morning. They were about 15 minutes apart and mildly uncomfortable. I was able to breathe through them and doze in between. After an hour of this, I told the nurse, who put me back on the monitor. She wasn’t able to get the contractions to show up there, but I knew these were real. I woke Rob up at 4:30 when they were getting closer together and told him that I thought it was time to call Megan. Megan arrived at about 5 am. She put a TENS unit on my back that created a sense of little lightning strikes on my skin–this triggers your brain to release natural pain relievers (endorphins). Then when a contraction hit, there was a button I could push that would increase the stimulation. Between Rob squeezing my shoulder or heel and this TENS unit, I was feeling fairly in control during contractions over the next few hours. Megan put on some relaxation CDs, and while lying on my right side in bed, I actually fell asleep in between contractions for a little while. We used some clary sage oil to help strengthen the contractions and make them more regular, and I tried a lot of different positions using the birth ball; the two I liked best were rotating my hips while sitting on the ball and leaning forward over the ball on the bed and swaying. I had thought that I wanted to use the shower for pain relief during labor, but when it came down to it, I had no desire to do so.

Around 10 o’clock or so, though, the contractions changed. All of a sudden, the TENS unit wasn’t working. Swaying wasn’t working. Massage wasn’t working. Slow-dancing with Rob wasn’t working. I swore at least once, and then started to feel like I was going to throw up. My brain was still rational enough to say, “Hey, I think you’re entering transition” and I knew things had to be getting close. In order to reduce the risk of infection, I hadn’t had a cervical check since my triage evaluation. I started feeling pushy, and the nurse came to check me–I was at 8 cm and fully effaced! It was REALLY hard not to bear down at this point.

One nurse rushed out to make sure that my doctor was really on her way (she had been expected at the hospital already but no one had seen her yet). I don’t remember a lot of specifics during this phase, except that when Dr. Flad arrived and checked me 15 minutes later I was 9 cm, and 5 minutes after that I was complete and finally allowed to push.

I ended up pushing for 2.5 hours, though it didn’t seem like nearly that long at the time. I was so exhausted by lack of sleep going into this that I couldn’t hold my own legs back or curl up over my belly while pushing, which I think is at least partly why it took so long even for our little peanut to make it around the pubic bone. Megan set up a tug-of-war system using a sheet and the squat bar, which allowed me to pull myself up for contractions–this was somewhat easier for me to manage that holding my legs back.

My legs really started cramping close to the end of the pushing phase, which made it really hard to push three times per contraction. My contractions also petered out a bit. They put some Pitocin in my IV, but I don’t think this helped much at all. Megan pulled out the clary sage oil in her doula kit that had worked earlier in the morning to stimulate my contractions. I’m not sure if this helped during the pushing phase, but it made the room smell good 🙂

I ended up with a small episiotomy (which thankfully didn’t extend). I consented to this after knowing that I already had a second degree vaginal tear that would require sutures and figured what are a few more sutures on my bottom at this point?!? Episiotomies usually aren’t needed at all, but I think it was the right decision in my case since it was the next one or two sets of pushes that brought our little man into the world.

He cried and screamed after he was out, but he was pretty grey and floppy. Rob was brave enough to cut the umbilical cord. I did get a chance to hold him before they took him to the nursery for resuscitation, and Rob got to carry him to the nursery in his arms (against hospital rules!). Megan stayed with me while I delivered the placenta and got sewn up. Nutrition services timed the arrival of my afternoon snack (a chocolate milkshake!) perfectly, so I got to sip on that while my bottom was being put back together 🙂

I fell in love with the “ice diapers” immediately! They helped more than anything with the soreness. My doc had written orders so I could have Percocet for pain if needed–she was really concerned with the amount of swelling I had from the prolonged pushing. I took ibuprofen and Tylenol once immediately following the delivery and then didn’t ever feel like I needed it again (though I did continue to take the ibuprofen to help with the swelling). The perineal discomfort is NOTHING compared to the pain of an unmedicated labor, so narcotics just seemed unnecessary to me, not to mention constipating.

Rob was off with Nathaniel during the time I was being fixed up, as we had planned earlier on during labor. Right after my sutures were done, Rob and the neonatal nurse practitioner came back to tell me Nathaniel been put on a ventilator and had been given IV fluid, but that he was looking so much better so quickly. It was hard to see my little guy with all those tubes and lines, but he was so pink and much more vigorous-looking when I saw him later than at the time of delivery.

He was off the vent about 10 hours later and weaned right to room air with no extra oxygen support. He spent the next week or so learning to maintain his body temperature in an incubator, and then we spent the next 3 weeks on feeding, first through a tube through his nose down to his stomach and then by breast. At first, his GI system wasn’t processing the breast milk I had pumped, but after a few days of rest, he was able to increase his feedings and stop the IV fluids. Breastfeeding was slow to start, as is typical for preemies, but right around 37 weeks gestational age (3 weeks old) he started to get the hang of it and really took off.

What delayed Nathaniel’s discharge from the hospital was apnea of prematurity, which is where the brain’s breathing center isn’t fully developed yet and the baby periodically stops breathing. We had two sleep studies while in the nursery to see if Nathaniel had outgrown this, but both studies showed immature respiratory patterns; instead of sticking around in the hospital after the second study, we elected to start him on caffeine by mouth once daily and to use an apnea monitor at home.

After 36 days, we were finally able to take our little guy home on August 5, 2009. The support and care we received from the staff at Southdale’s Special Care Nursery was fantastic, but nothing beats the feeling of going home as a family for the first time after such a long wait.