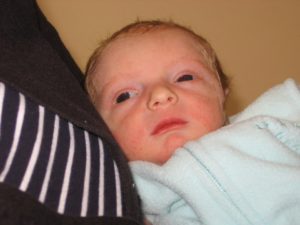 It all started at 7:20 p.m. when my water broke (conveniently just as I was finishing up going to the bathroom!). I shouted down the basement stairs at Rob, who was in his office, that my water just broke. He came running up, saying, “Really?!?” I looked up the clinic number and called the answering service to notify them that we were heading in. Then I called the hospital and let them know we’d be there a little after 8.  While I made these calls, Rob called a friend of ours to come and watch Nathaniel; thank goodness that Chris lived close by and was able to come right away! I called my mom and let her know that my water had broken; she and my dad grabbed a few essentials and began the 90-minute drive to our house.

By 7:40 p.m. Rob and I were leaving the house and on the way to the hospital, which is on the opposite side of the metro area. About halfway to the hospital I started having regular contractions that I couldn’t talk through and needing to breathe and moan through about every 2-4 minutes. Sitting in the car was not fun, and I really wanted to stand up and sway.

At 8:05 p.m. we got to the hospital and were quickly escorted to a room. I asked to use the bathroom before getting on the monitor and having an ultrasound to confirm position. I had a contraction in the bathroom and realized that I was feeling an urge to push. I also had the momentary thought of “I can’t do this much longer” which triggered me to think “Oh shit, I think I’m already in transition!”

I came out of the bathroom and told my nurse that I was feeling a little pushy. Contractions were coming strong and fast now, and I didn’t want to get on my back in bed for anything.  I told them we needed to ultrasound first and worry about heart tones later; luckily they agreed and also did a cervical check at the time of the ultrasound. The nurse panicked when she felt a foot and what she thought could be a hand.
At this point, I should mention that Rob was out of the room (with my permission) to move the car out of the emergency circle in front of the hospital. He left a pregnant wife who was able to calmly tell him to go move the car; he came back into the room to find the medical equivalent of a pre-op SWAT team poking and prodding me.

Everything was moving too fast at this point to get clear details. They called the in-house OB, whom I’d never met but could care less as long as he or she could help get this baby out and make the pain stop. I knew there was no way I could have an epidural in time and tell Rob that I consented to general anesthesia.

There were people all around; the room felt so chaotic. They finally got things set to scoot me right across the hallway to the OR. Once there, though, it seemed like they were not quite as much in a rush. I got scrubbed with iodine and shaved (lovely) and cathed (even lovelier). I was sort of trying not to push, but the contractions were so intense and it really helped the pain to push. They didn’t let Rob in, thinking I’d be under general, and our doula hadn’t yet made it to the hospital; on top of the chaos, I was mentally unprepared to deal with the pain of contractions, having thought I had a C-section all lined up nine days down the road!

The OB got in there gloved and gowned and I kept telling the anesthesiologist to just put me out already. They were probably a minute away from knocking me out when the doc said, “Emily, do you want to try for vaginal delivery?” I knew this must mean that we were close to full delivery or he wouldn’t have offered. I said something like “Let’s go for it,” and he told me to start pushing.

Basically, once I started pushing, Dr. Woo and the nurses constantly said, “Keep pushing, keep pushing” even when I didn’t have a contraction, which was really challenging. I could tell they were all a little nervous about this delivery. Dr. Woo was calm, but using that serious tone of voice that told me we just needed to get this done. I have no idea how long I pushed, but it wasn’t very long (especially compared to the 2.5 hrs I pushed with Nathaniel!). And, boy oh boy, did it feel good to be done!

They had a special care nursery team standing by, and Timothy ended up getting bag-mask ventilation help for about 30 seconds to get him breathing. Fast deliveries often result in stunned babies, and coming feet first was an added level of stress. Overall, though, he perked up quickly. Rob got to hold him shortly after that, and then, after a little bit, I got to hold him skin-to-skin on my chest while on the OR table.

Dr. Woo handed me off to my clinic’s doctor once she arrived. She got the less exciting part of the deal: sewing up my bottom and delivering the placenta. 🙂 I ended up with another episiotomy (I needed one even for 4.5 lb Nathaniel), and this one extended to a partial 3rd degree tear … lots of stitches, but really not that bad — nothing that ice and ibuprofen couldn’t control. The placenta took longer to deliver than Timothy did — they had given me a shot of terbutaline to slow contractions down, but that meant the placenta would take longer to detach.

Our doula was sitting with Rob and Tim in my room when they rolled me back out of the OR.  She was sorry to have missed all the excitement, but we all knew she wouldn’t have been allowed in the OR given the chaos — had we had our scheduled C/S, Megan would have been allowed in as well as Rob, but they don’t allow anyone extra in when there’s a chance for general anesthesia (too creepy to see someone you care about with a breathing tube, I guess). She helped us get started with breastfeeding and helped us process what all had just happened. I was still in shock that I’d already had a baby at that point … and I’m still stunned at how fast it all went!