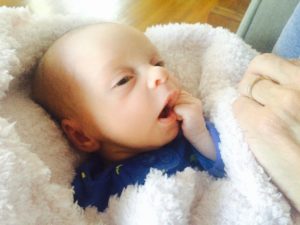 Maternity leave is in such a dire state in this country, it’s practically safe to bring up at dinner parties. Everyone seems to agree that when an employed woman gives birth, she ought to have the right to some serious time off to recover and bond. But as we progress toward equality in the workplace and equality in the household, paternity leave is rarely even suggested as a way to push us forward. Let’s talk about some reasons to get behind Equal Paternity Leave (yeah, I’m capitalizing it).

1. Equality in the workplace

When a woman of child-bearing age is being interviewed, the possibility that she might take maternity leave is considered. It’s not supposed to be, but it is. It’s an unspoken, shoulder-clenching reality. Over my years in agency work, I’ve heard people say things like “you can’t hire her to be the new admin, she’ll go on maternity leave. We need somebody!” — and that’s despite my being of child-bearing age myself; who knows what those menfolk say when we womenfolk aren’t around. These things are said with a cheeky grin. Sometimes, these things are said by women.

It’s hard to get recognized for all your hard work when you go on maternity leave at an “inconvenient” time (there is never a convenient time). Despite how diligently you may prepare your team for your absence, there will be people who have to pitch in while you’re out, people who find holes in what you laid out for them, people executing your plans and getting recognition for things that potentially put them in a position for a promotion — maybe even one that might have been yours. It’s another case of “it’s not supposed to matter but it does.”

But if paternity leave were equal to maternity leave, men would perhaps not have the leg up on mid-career women the way they presently do.

They might not take the full paternity leave, especially at first, when culturally we don’t expect them to. But that brings us to item #3.

3. Equality in the home

It also allows for mamas with tired and ravaged bodies to rest and recover with their partners’ help.

There are more kinds of families than I would dare try to illustrate, so let’s take the example of two working, married fathers. Traditionally, they are not entitled to any time off. Just give them both equal family leave. And how about maternity leave for gay moms whose partners gave birth? It’s not paternity leave, per se, but it’s equal leave for both parents. It’s the right thing. For everybody.

Best of all, Equal Paternity Leave would allow families to bond and adjust to their new size healthfully. I know I’m pushing the equality thing hard here, but let’s not forget the love. Equal Paternity Leave means that babies (and mommies) get to be with their daddies. Our healthcare system is set up to put women who just gave birth on “disability,” practically spelling out that she’s only granted the time off because she’s probably physically unable to work (and those are the lucky women with the right work status at the right time). What if our government, with all its talk about the importance of the American family, showed a definitive interest in the protection and nurturing of strong family bonds? Guaranteeing every father paternity leave should be part of that equation.

Maternity leave is definitely important for the future of our culture. It should be mandatory for employers, paid and longer than it is. But as we march forward and demand the right to care for our little ones, why not demand that right for fathers, too? Let’s make this a parenting issue and a humanity issue, not a women’s issue.