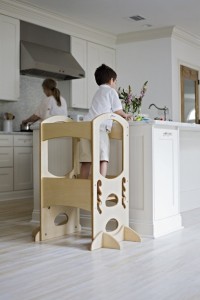 Sometimes I wonder how we survived before we had a Learning Tower.  I cannot say enough good things about this product to explain just what a game-changer it has been in our home! I was inspired to get one after seeing a friend from California post a picture of her daughter standing on one while helping in the kitchen. It looked so sturdy and safe compared to standing on a chair, which is just what my 18-month-old monkey had learned how to do, nearly giving me at least one heart attack per day … and usually more. (Even the knife block in the far back corner of the kitchen counter wasn’t safe from his reach!)

I tried to find one used, since the price tag initially gave me a shock, but no one on my local Crunchy Mama Swap group was selling a Learning Tower or even a homemade knock-off. I decided to buy one new from Amazon, and I have never regretted spending that money. In fact, I think the Learning Tower is second only to car seats on the list of most expensive baby-related products purchased, but it has been worth every penny (and Mama’s sanity is priceless, right?). Ours stands alongside the counter on the outside of the peninsula of our kitchen.  Our “tower station,” as it has come to be called, gets used for meals and snacks (sometimes by up to four kids at a time!) as well as for helping mom and dad prepare food or for working on arts and crafts projects while the older kids are doing school work at the kitchen table.
The Learning Tower is really easy to wipe down; all it takes is a damp cloth most of the time (I love my Norwex EnviroCloths for this!), but we’ve also taken it into the backyard for a thorough hosing down after a couple of very sticky incidents.  The only way this product could be improved is if it came with a built-in vacuum or other floor-cleaning apparatus.  Maybe, though, it’s just time to give in and get a dog.