We were pregnant. Didn’t think it would happen but knew it could, and it did. I had to fight and plead to get a doctor’s appointment because I genuinely was surprised (pleasantly) I was pregnant (see From the Bitter Mom, Pregnancy Happens) and apparently they don’t do pregnancy tests or early checkups at the doctor anymore. When I convinced them that I was very confident that I was between 3 days and 3 months pregnant they let me have an appointment.

My OB/GYN, whom I adore to this day, congratulated us and did a typical physical exam. Then out came the baby heart rate finder thing (that’s the technical term for sure). While laying there I thought she was really taking a long time to find the heartbeat, which raised some concern of course, she also kept going back and forth around my abdomen, despite having heard some noises. I assumed this is what always happened, as I had never been pregnant before. And then we all heard the muffled fluttering and felt all the feelings. But then she kept going, moving that little thing around my abdomen. Dr. Larson smiled and said “everything sounds good, we will schedule an ultrasound to determine the due date,” and gave me her reassuring smile that has made me feel better for the last few years. I was a little taken back, thinking that was the appointment that I made, but scheduled the ultrasound. How many days later that appointment was I don’t remember — felt like months, may have been the next day — but this was real, I heard its heartbeat.

A hundred years later or so, SO and I walked into the same office and were shown to the back room where the sign said “imaging.” I shrugged and took a breath, lay down and pulled my shirt up and my pants down (don’t worry I wont get pornographic J). I got my first warning “this may be a little cold” as the tech spread a ton of jelly lube (this is also the technical term) on my belly. As an exercise physiologist I have a fairly thorough understanding of human anatomy and was able to recognize nothing of what I saw, that is until I could recognize everything that I saw. Two. There were two. “Why the f*%k are there two?”

Now as far as the ensuing profanities the ultrasound tech was exposed to, I can not confirm nor deny my involvement, but they were there, I heard them, I am just unsure as to who’s mouth they were coming from, although I can assume it was not the tech’s profanities and I know I have been known to slip profanities off my tongue. First momma confession: I believe I swore at the ultrasound tech and for a moment I really thought my SO was going to leave the room and hated him for it. She was not at fault and I knew that, and he wouldn’t really leave, or if he did he would come back, but it happened and I am sorry. How could you have so many feelings in the blink of an eye? It was just the beginning. Flash forward to walking out of the clinic with a CD and pictures in my hand. 8 weeks. Is that what she said? This little computer mouse and platypus have been growing inside me for 8 weeks now? 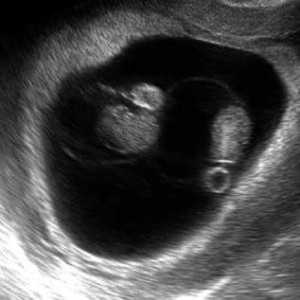 I wanted to wait to tell the grandparents. I wanted to. But how do you possibly withhold such information? So, rather than wait, we went straight to their houses, after getting lunch of course … I had two babies to grow, a girl needed to eat. My mother’s first. Why my mom first? She had dreams for years about me having twin girls, and a girl named Jasmine, which I chalked up to being dreams … not foreshadowing. I had to share the creepiness of it all. And, she lived right down the street from Taco John’s. I walked into my mother’s house and handed her the CD with the ultrasound pics on it. She popped it into the CD drive on her laptop. Her first calm question, “Why does it say BABY A?” I told her to just look at all the pics and I continued chomping on my burrito, trying to act non-chalant, and she of course eventually came across BABY B, at which point she SCREAMED “I told you!” And that was that, my mother’s premonition came true, now she was to be right about all things for the rest of her life … dammit. J

Shortly after the big reveal, stepdad pulled up and my mom RAN (I have never seen her run) out to show him the paper pictures because she could not wait for him to come inside to look on the computer. Despite the pictures seeming obvious to my mother and I, dad needed a little explanation, then had a very similarly stimulated response.

Then, we headed to the in-laws (for the sake of story telling they are my in-laws rather than my significant other’s – now fiance’s-parents … another blog, another day) where I cannot recollect the details, despite trying to remember to ask them for the last three months, so that will have to be yet another exciting post in the future!

The excitement was colossal; the fear was equally vast for me and SO. All the doubts came blazing back. “How am I going to finish school, where are we going to live, are we really in love, could we ever raise a kid together, could he really be a dad, could I really be a mom” (from: From the Bitter mom Pregnancy happens) … but now they were doubled! Hours and hours of reflection and many conversations with many close friends and family brought back my confidence.

These loved ones reminded me of my patience, tolerance, generally laid back attitude, knack for juggling many things at once, and rolling with the punches — yes, these are skills I possess, or are a part of my DNA. Learn to take a compliment, Lex.

One of my character flaws is that I don’t like to do things that I don’t do well. I constantly reminded myself I have been babysitting for as long as I can remember, I am actually good with kids. I come from a huge family, babies and kids come with said family and I was around them A LOT. I firmly believe the universe doesn’t dish you more than you can handle, so I would handle it. A slight adjustment to that character flaw happened then: I did not have to do it well, but I had to do it. But why wouldn’t I do it well? I have done everything else well in my life (except serving tables, I don’t know how I pulled that off for so many years, because I really wasn’t very good).

ENTER: ONE DAY AT A TIME. A phrase adopted from Alcoholics Anonymous but to be used by anyone experiencing all the emotions, dread, fear, anticipation, excitement, love, yearning, confusion, exhaustion, you name it I felt it. New plan: take it a day at a time. Worrying and doing all the planning in the world was not going to prepare me for twins, I was going to figure it out as I went. I didn’t read any new mom books, I had one given to me that I scanned from time to time if I was bored but it seemed like it was just review. I went to school. At the time I happened to be in clinical nutrition, so I had the whole eat right part down, even the how to feed the babies well after they were born part. I took anatomy and physiology, and exercise physiology. I understood what was happening with my body better than most. Educating myself, keeping busy, not dwelling and doing minimal planning got me through my pregnancy fairly painlessly. Another AA line is “Let go and Let God.” Now this does not have to be God, it can be mother nature, it can be any higher power you believe in, but if I have learned anything in 2.7 years of mothering twins it is that planning is for the birds and you had better learn to think fast, stay on your feet and trust that this too shall pass or you will lose your mind!