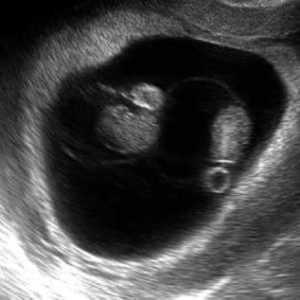 It was at my second appointment with Dr. Larson that she delivered the dreaded news that my babies were at high risk and would need essentially constant monitoring. I had 1 ultrasound every week, sometimes 2 from 12-30 weeks. She told me why and it sounded like it was a precaution, better to be safe than sorry kind of thing, but all SO heard was “High Risk Pregnancy” and was immediately emotionally stunted.

Click here for Why the f*%k are there two? My (not so glamorous) story of having twins: Part 1.

Now why were they high risk? They were Monochorionic Diamniotic.

What the heck does that mean? They shared a placenta (monochorionic) but had their own amniotic sacs (diamniotic).

In this scenario there are two major risks, one is in the strength of the placenta, the other is TTTS. The placenta gets weaker after week 37 in all pregnancies, but when there are two babies (or more) in there the risk is greatly elevated … or respectively doubled; one organ supporting two lives would make any organ a little stressed out. There is also a high risk of Twin-to-Twin Transfusion Syndrome (TTTS), where identical twins share a blood supply and one twin may receive excess nutrients and fluids and the other a deficit, which could be fatal to both twins, requiring fetoscopic laser surgery to repair. Not only was the pregnancy in and of itself a high risk but of course my placenta was oddly shaped, and the umbilical insertion was at a funny angle so they wanted to closely monitor the babies growth to make sure they were getting what they needed. I didn’t spend nearly as much time on the internet researching twins as my mother did (lol), but I did a good share and I wasn’t going to worry about it. I made a decision and I was going to stick to it. What would worry get me anyway? More stress on me=more stress on babies, we all needed to be happy and I was in very good care, with both perinatal specialist and a well experienced traditional OB/GYN closely monitoring me and the babies.

Around week 20 Dr. Larson said I was not gaining enough weight, I was only up a few pounds from my pre-pregnancy weight. I had noticed too, my arms face and legs were getting thinner. Many women would be grateful, but I was afraid, because despite a lifelong struggle with weight, I knew very well that pregnancy was not the time to be losing weight.

The good and bad about food when growing two babies is a grand matter of discussion I have had with many a mother, and I mostly get moms who are jealous, but those who really understand are more sympathetic. When you have two babies in your abdominal cavity it screws up your stomach’s space to expand approximately 2x as much as it would for a singleton, and in turn your ability to eat very much in any one sitting is pretty much history. Now, I ate pretty healthy, I have for years. Pregnancy just re-sparked my lifelong interest in nutrition. Dr. Larson recommended I take a prenatal vitamin and drink at least 1 if not 2 Ensures every day to supplement my nutrition, and try to get around 3000 calories a day. Three thousand calories. That is a lot of calories, especially healthy calories. Sure I could eat McDonald’s 3x a day and get that many calories but it is hard to get when you are eating whole fruits, veggies, grains and lean protein and your stomach feels smaller than it has ever been. The babies were still growing fine, no concerns from the babies’ doctors, but my doctor was worried, and so was I. Enter: EAT ALL DAY LONG. I literally carried food with me always, and was eating always. When I sat down for a meal I would get a few bites and be full, so per my clinical nutrition professor, I ate all day long. We had fancy schmancy nutrition software at school and I did a three day test with my new system of eating all day and having 2 ensures everyday and I was meeting every nutritional requirement for my statistics. I was tempted to stop taking the prenatal because I had this nutrition thing down, but there was no setting on the fancy schmancy software to input twin pregnancy J I gained 27 pounds throughout the pregnancy, which is still less than they wanted me to gain (I understand they want you to gain around 25 pounds with a singleton, plus another ~7 pound baby, I should have gained over 30 pounds).

At the 16 week the ultrasound the tech said she was pretty confident they were both girls, but could really only see one. Considering they are identical twins, and unless they would be only the second pair of b/g identicals in the world, we could assume they were both girls (even though it would have been super cool to have b/g twins!).

Through consult with both my OB/GYN and the perinatal specialist we decided to take the babies out via c-section at 37 weeks if they didn’t want to come on their own before then. This was not how I pictured my pregnancy going. I am kind of a hippie so forced surgery took quite a bit of convincing. Why do we have to take them at 37 weeks? It didn’t feel right, if they were ready to come at 37 weeks they would come on their own, don’t tear them from my uterus. I asked about being induced first to try to have them vaginally, and of course my lovely doctor said yes of course we can try that. Or you can leave them in there until you go into labor and you could have stillborn births of one or both, or you could naturally deliver one and the other could be (and was) breach and you will have to recover from both a vaginal delivery and an emergency c section. Or it could all go perfect and you could deliver them both naturally and everything could go as you imagined it. I couldn’t think of anything but keeping them healthy of course and all involved medical professionals recommended C-section for both mine and babies health, so despite my gut I scheduled it.

My OB/GYN is only in the hospital on Thursdays so Thursday February 14th, 2013 Kira and Ryin were scheduled to come into our world, yes Valentines Day. This again was not my first choice, but not many moms get to make many choices when it comes to when their babies come, especially if they are delivered naturally, babies come when they feel like it … from my understanding anyway. I suspect that is one reason why so many moms make birth plans, but my birth plan was developed as I went. It is so so so so freakin hard to have all these things happening to you that are completely out of your control, and if it makes you feel like you have a handle on something to have a birth plan, I totally get it, and hate to admit I am envious of many other mothers that got to develop a birth plan more romantic than abdominal surgery on Valentine’s Day. 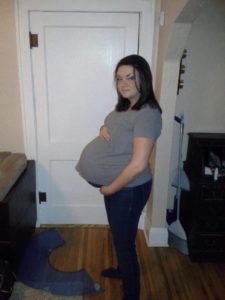 I slept that night, wasn’t expecting to (the picture on the way out the door may appear to tell a different story — see the picture at right).

I woke up pretty refreshed in fact, I think the thought of relief from the heartburn and the immobility sounded so relieving I dozed off right when I laid down. Right when I lay down is totally relative, as laying down took an astronomical amount of effort between myself and my SO, including pillows strategically placed here there and everywhere, and the cool snuggle preggo pillow that wraps around you just so, and blankets just so, and fan just so and so on and so on, however, once I was in a semi-laid down resting position I dozed off and woke up rested and ready. 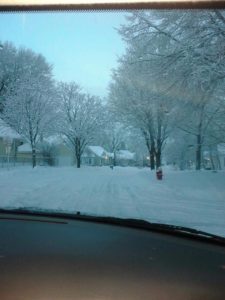 We drove through the beautiful aftermath of an overnight fluffy snow storm, you know the kind that fills every branch with snow and makes the world look like a winter wonderland for a few hours before the salt and dirt ruin it. And I had day dreams of sugar plums and ponies … NOT, but I was so ready to meet my babies. But wouldn’t you know it? I developed a nasty hacking cough overnight, but was afraid they wouldn’t admit me if I called and said I was sick, so I sucked it up … and later cursed myself for it, because let me tell you, the LAST thing you want is a deep cough after major abdominal surgery while trying to juggle two babies and breast feeding and … well … breathing for that matter.

I had high blood pressure that morning … not a surprise my life was about to change forever, there was a small … by small I mean gargantuan, chance that I could have been subconsciously stressed. And I don’t know what they did to bring it down, probably nothing I just got too tired and they rolled me into the operating room. The whole prepping part of the surgery took about 3 hours and the only real pain I felt was from the needle that numbed the epidural site. And lets all thank GOD or science or whatever you believe in that epidurals are done behind your back, because there is no way in hell I could have seen that needle and thought ‘sweet, that’s looks painless, how about you stick it right into my spine’.

It could not have been more than 10 minutes from the time I laid down to the time I heard a baby. I could feel tugging and pulling and it was really friggin’ weird but it was over so fast I couldn’t believe what was happening. Again before I knew it I was in recovery but it felt like I was unnaturally bent at mid back, like my lower back and legs were hanging off a cliff … like there was a knee joint in my midback or bottom rib that bent and hung like your calves over a chair when you are sitting … the physiologist in me was totally freaked out. I felt my leg’s weight on my upper spine and torso but I couldn’t feel anything else below my chest. I don’t know if it was just my nerves about the whole last 9 months or a reaction to something with the surgery but I was pretty violently shaking and did not feel comfortable holding my babies for many hours, which freaked me out more.

Then the coughing started up again, and OMG that sucked. Ever try to hold in a cough or a sneeze? That sucks in and of itself, but pressing a pillow over an incision in your lower abdomen at the same time just to stabilize it so it doesn’t feel like you are shredding your insides, and trying to take care of two infants and yourself post-op when you can’t move your lower body … although I cannot actually compare my own vaginal delivery to a caesarean section (yet) I would venture to guess the c-section is not the easy way out that many people have a tendency to believe so stop judging me and other mothers that opted for the c-section (another rant, another day-xoxo).

They were here and they were healthy. I was miserable but we were blessed. 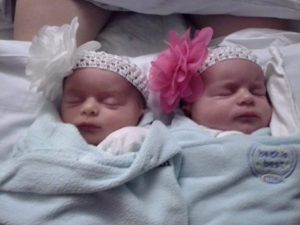