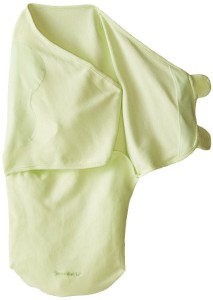 In the mama group I’m part of on Facebook, I’d say one of the top questions asked by pregnant moms is: “What are the most necessary products you purchased/received for those first few months of Mommyhood?”
I thought I’d write about what got me through those first six months before they get hazier than they already are (my son is almost 13 months old now).

Keep in mind, those fledgling days/weeks of parenting are wildly different for every single family. I’m aware that these are just my favorite products, and that I’ll leave out ones that friends of mine SWORE by (wipe warmers, for instance) and I’ll include stuff that no one else probably uses (Ball jars for mixing formula), and that this is just one Mama’s opinion on the essentials.

When we were in the hospital, my husband was an expert swaddler with a simple receiving blanket. Me … not so much. After we went home, our nugget was breaking out of my swaddles within the first week. The second week, we stopped swaddling because it seemed like he was really struggling to break free and it seemed mean to force him in there. Then we visited a lactation specialist, and she off-handedly mentioned that even if it seems like he’s trying to get out, there’s a very high chance that swaddling is the answer. So we got Summer Infant SwaddleMe Adjustable Infant Wraps. They saved our life. We ended up swaddling him well into 5 months. And though I was terrified to transition him out of it, he did so much better than I could’ve imagined. The velcro is strong enough to keep even big, strong babies (like my almost 10 pounder) under control, and for us, it got us to a full night’s sleep much faster. Godsend.

2. Breast pump and all the salves, pills, shields, lactation cookies and stout beers that go along with breastfeeding.

In a perfect world, the baby comes out, instinctively crawls up your chest, painlessly latches on, and gets enough milk to sustain him/her for months or a year or two years or more. In the real (my) world, the baby came out, I breast fed him “perfectly” and constantly for the first two days, he didn’t get enough milk because he was a porker, ended up with terrible jaundice, and was back in the NICU for five days. During those five days, my milk finally came in and I had to start pumping and supplementing right away. When he was better and home, we struggled, slogged, cried and celebrated during every feeding. My baby was a chomper and killed my nipples. He never got enough milk from me so he was on a 50/50 breastmilk/formula diet (during which we mixed tons of formula and used a big, 25oz Ball jar to mix/store said formula in). My dreams of blissful breastfeeding went out the window. I spent five months pumping/feeding around the clock, doctoring my nipples with lotions and plastic wrap, and trying like hell to get a handle on breastfeeding. I am so grateful for the time I did breastfeed, and thankful for all the products out there that help moms who have a less than perfect experience with it. (If anyone out there has an idea for a non-toxic numbing cream for nipples, YOU WILL MAKE A BILLION DOLLARS.)

I know this could go with #2, but this was everything to me. A lovely nurse in the NICU suggested that I make my own by cutting two slits in a slim-fitting sports bra, and it was brilliant. They do sell many different kinds in stores, and even sell ones that have a pump built right in so you can secretly pump during a yoga class or something. But for me, my sports bra with two holes lasted six months.

4. Grass.
Not that kind of grass. I’m sure there are many different drying methods out there for bottles and all the crap that goes along with them, but for us, this simple, $13 solution was filled to the brim every single day. It was easy to clean and it still lives on our counter, 13 months in, for sippy cups and all the other toddler stuff we use and hand wash daily. 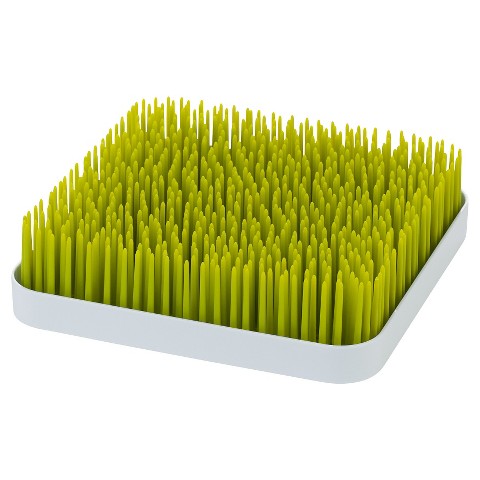 Now, I have plenty of friends who put their newborns in a proper “outfit” every day. I thought I’d be that person, too. I had hats and vests and corduroys for my little man which, for the most part, hung in our closet and were worn once or never at all. A couple of days in, I realized that I was not that mom. We went everywhere in jammies. Me included. Here’s a secret: babies look cute in EVERYTHING. No one who comes over to meet your bundle of joy will think twice about him/her being in a one piece, easy to zip off when a poop explosion happens, easy to contain and wash off spit up and pee, onesie. Also, beware. They make them with snaps too. For the first 3 months, that’s fine. But once they start rolling and kicking and such, zippers are the way to go. Also, buy them second hand. Most of ours came from consignment stores. They were $3-4, and that’s exactly how much to spend on something they’ll stain or outgrow within minutes.

I wasn’t sure how to phrase this last heading, but I’m trying to emphasize that the baby’s nursery was not an essential item in those first six months. I drove my husband crazy with my nesting in the final months before the baby arrived even though we knew we were going to sell the house shortly after he was born. And once he arrived, we RARELY set foot in that room. It was upstairs and we spent 90% of our time downstairs. We ended up setting up the pack-n-play in the living room for a changing table/storage area, and for the first three months he slept in a bassinet in our room. He used the crib for awhile before we moved, but he didn’t have to. We only moved him because he battled with his Dad for loudest snore. In short, please do not stress yourself about getting the nursery perfect before the baby arrives. Nesting is fine. Sending your husband to Ikea three times in a weekend for the right shelves … is unnecessary.

7. Patience, self-forgiveness, at least a couple of moms who you can confess to how long its been since you showered, some good beer or wine sometimes and a rule with your husband that nothing either of you says between 2 and 6 a.m. can be brought up again in the morning.